... In order for you to understand where the renders grow from, there is a small story to this work. I started to learn 3D graphics in 2008 and always liked to model different classic elements. Working in freelance, I performed various complex models and once I felt that I was ready for complex work in the classical style. But as it usually happens, the idea did not come immediately, same like the skills. It all started with a small room with one window and a poorly designed concept. I was very afraid to make carved beds, at that time skills did not allow, and any others did not fit the style. Therefore, the work came to a standstill. And after several tests of materials and attempts to make something beautiful, the work went on a “rest”. Another stumbling block was the power of the computer, which was sorely lacking throughout the work on the interior. The first tests can be seen in the photo below. 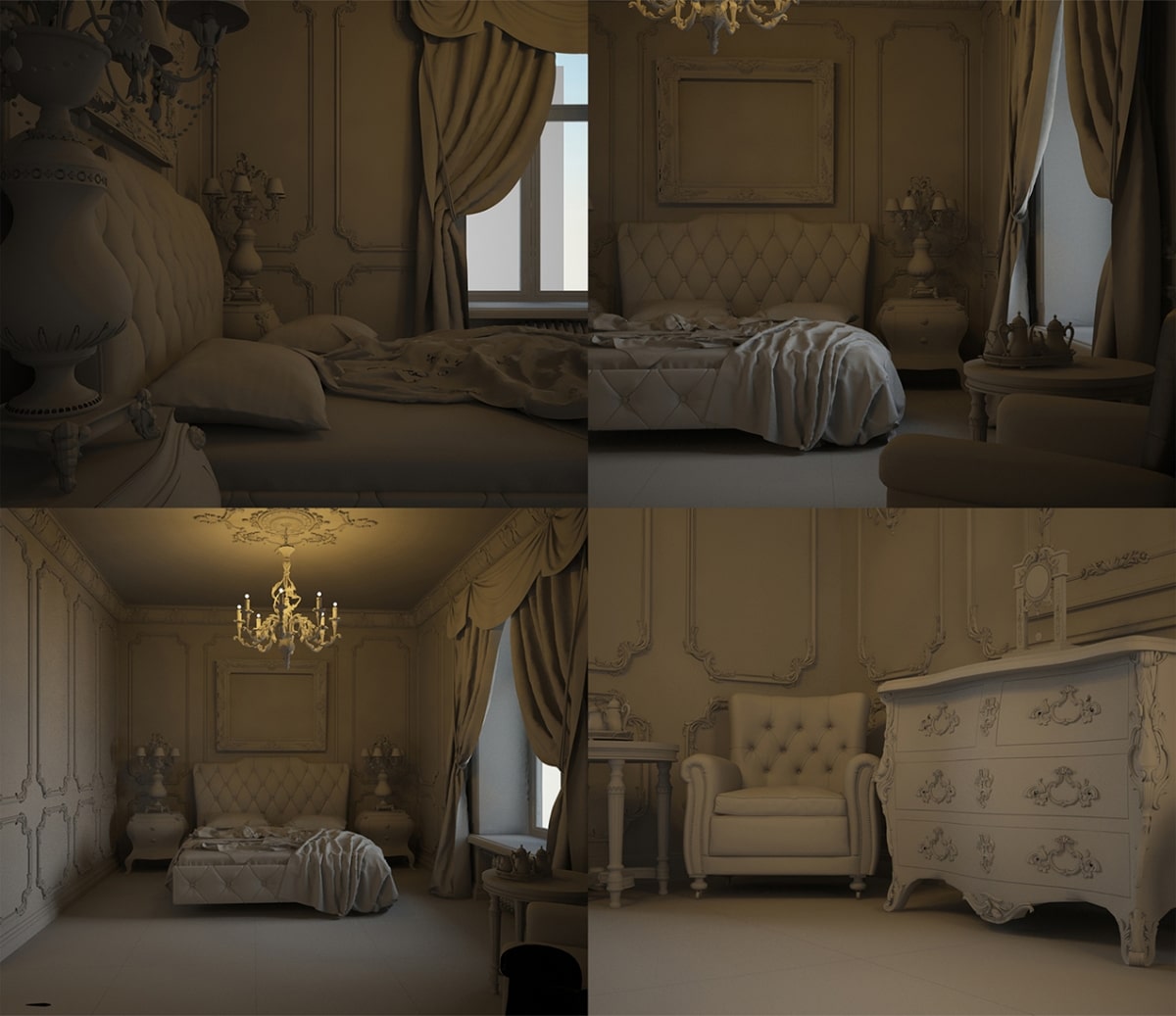 After a short break, I continued to work with the bedroom. At that time, the Corona Renderer had already come out and I decided to try render in it. I replaced part of the models. Was made a carved bed with bedside tables, an armchair, a radiator, a table. Once I made a fireplace in parallel, but forgot about it. Then, I found it and tried to make an interior with it, but I realized that my computer would fall apart on rendering a cache (vray light cache). And again, after some attempts, the work went to the archive. Several times it was transferred from disk to disk, remaining in my head an unfinished project. In vray, I also tuned the glass with ice very realistically, but in the Corona render it all disappeared.

And now, the time has come when I decided to combine all my models, old and new, in one project. These models could create a very decent interior. And then the problems began, what to make the main thing, what is secondary. All models could become the center of composition. Because these were high-quality, self-sufficient models that required small parts. I saved some stages of my work on models, so there is an opportunity to focus on modeling.

The radiator, which was not rendered, but was part of this project, then he found himself in the "Library". On the screen, the attachment of the pattern to the basic before and after geometry. 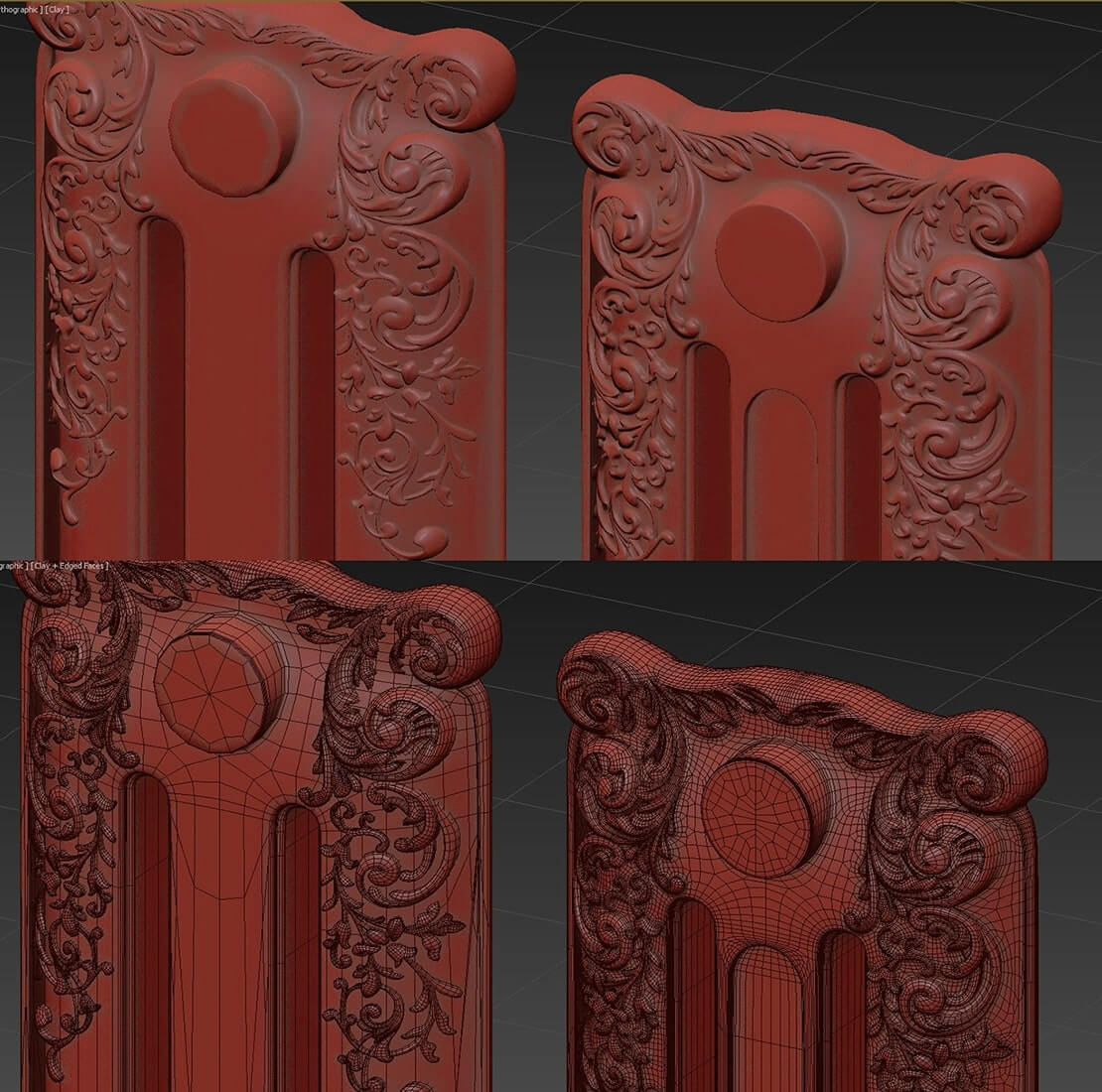 I managed to make a bedside table perfectly. But she didn't hit the camera 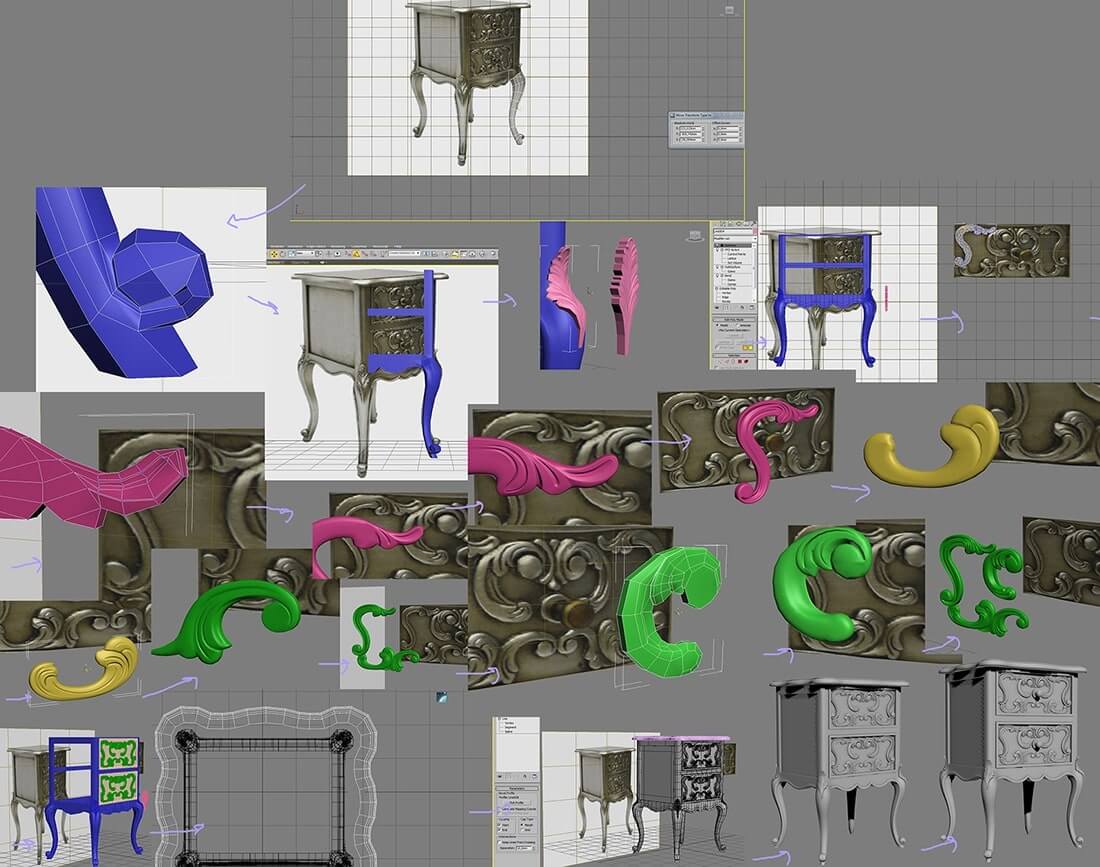 You can also follow the link to download the process of creating a bed, which was nevertheless rendered: D
And so after creating 3-4 interiors with all this stuff, I just decided to divide the work into independent pictures. Since the amount of work decreases, as does the size of the interior, which I needed. Now let's look at what the work consists of. We will consider 4 main frames.

Let's look at the composition blocks first. I scattered the colors approximately, although it could be tied to the golden ratio, but I'm a simple person: D
Blue, this is the background - the minimum amount of detail. Yellow is a direction so to speak, a place in which most of the details and the actual compositional centers are outlined. Inside, along the lines or corners of the frames are the most interesting moments that are striking. Complex geometry, rich play of shadows, lines that follow the direction, plots. At the chest of drawers, you can move the frame a little down. Each frame is balanced. 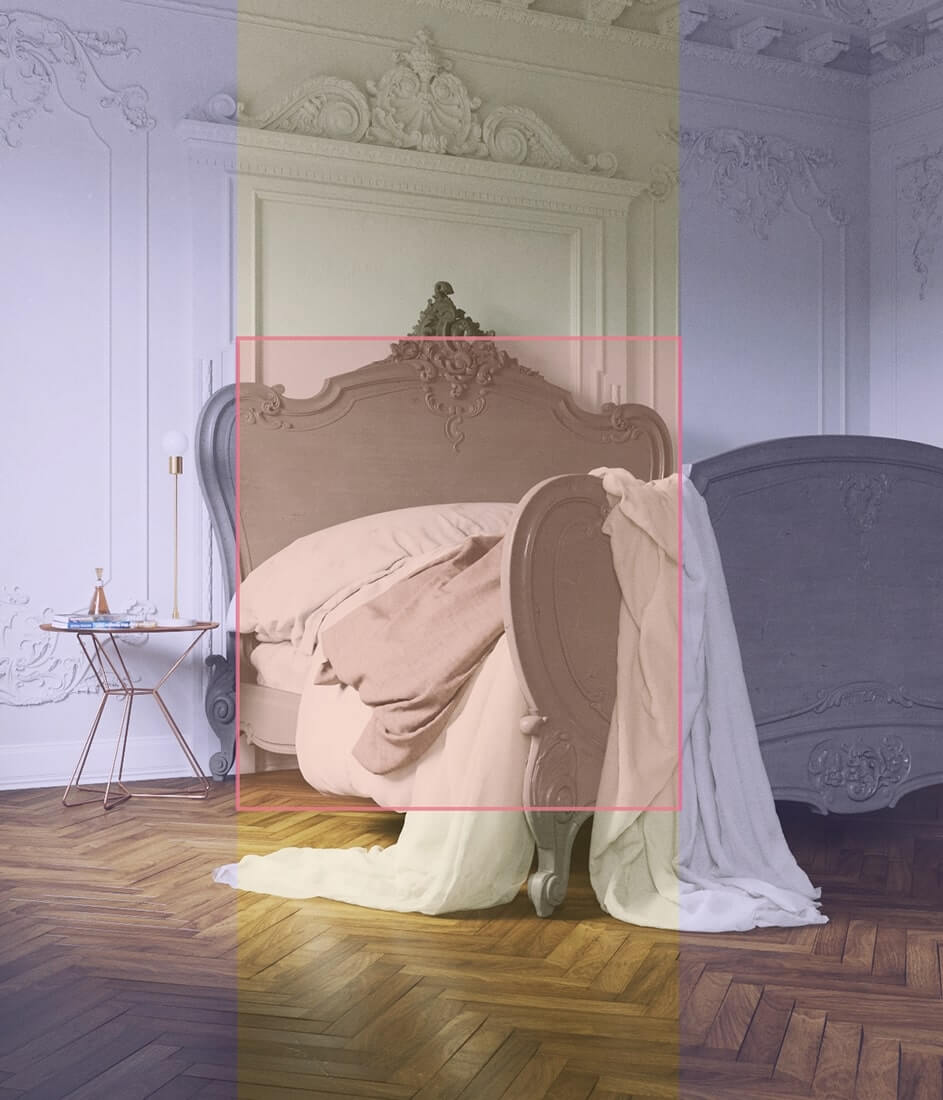 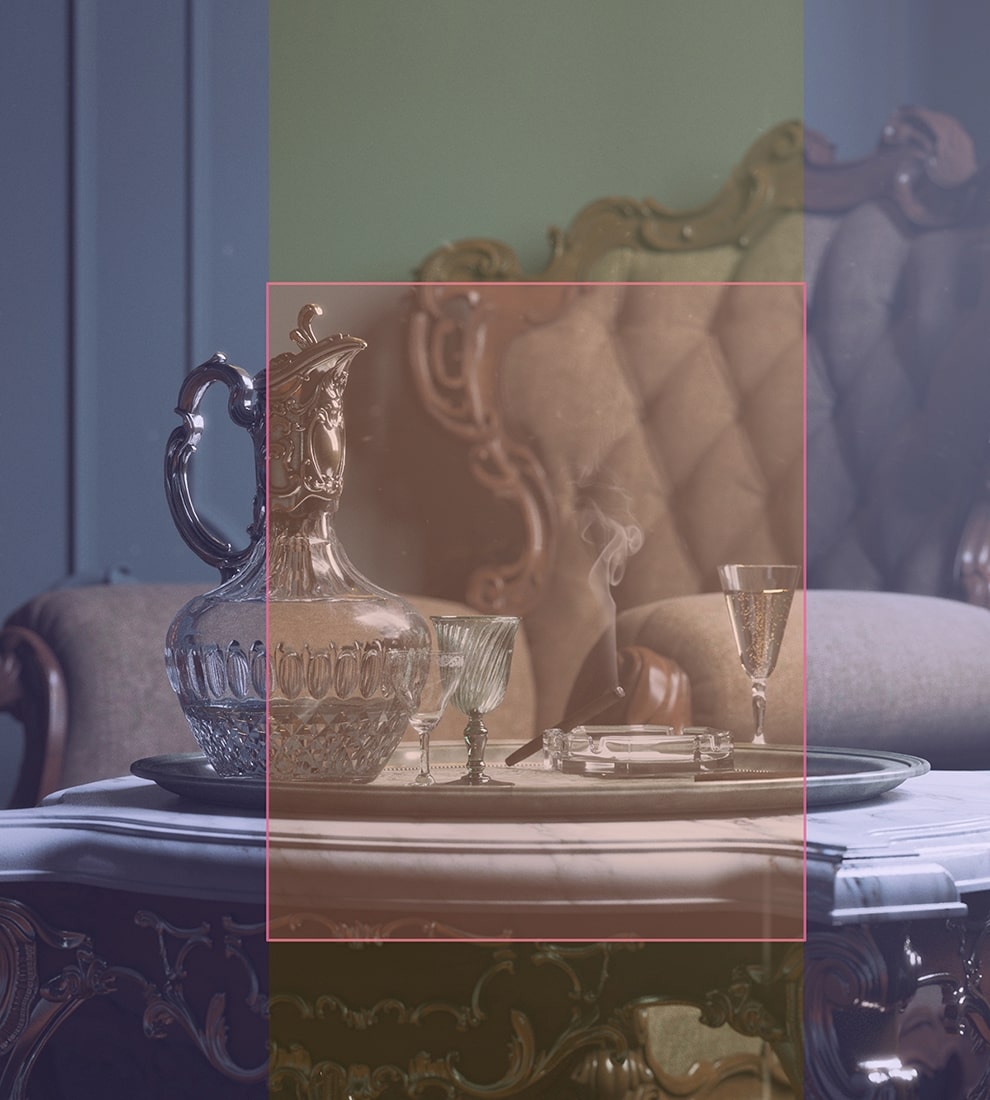 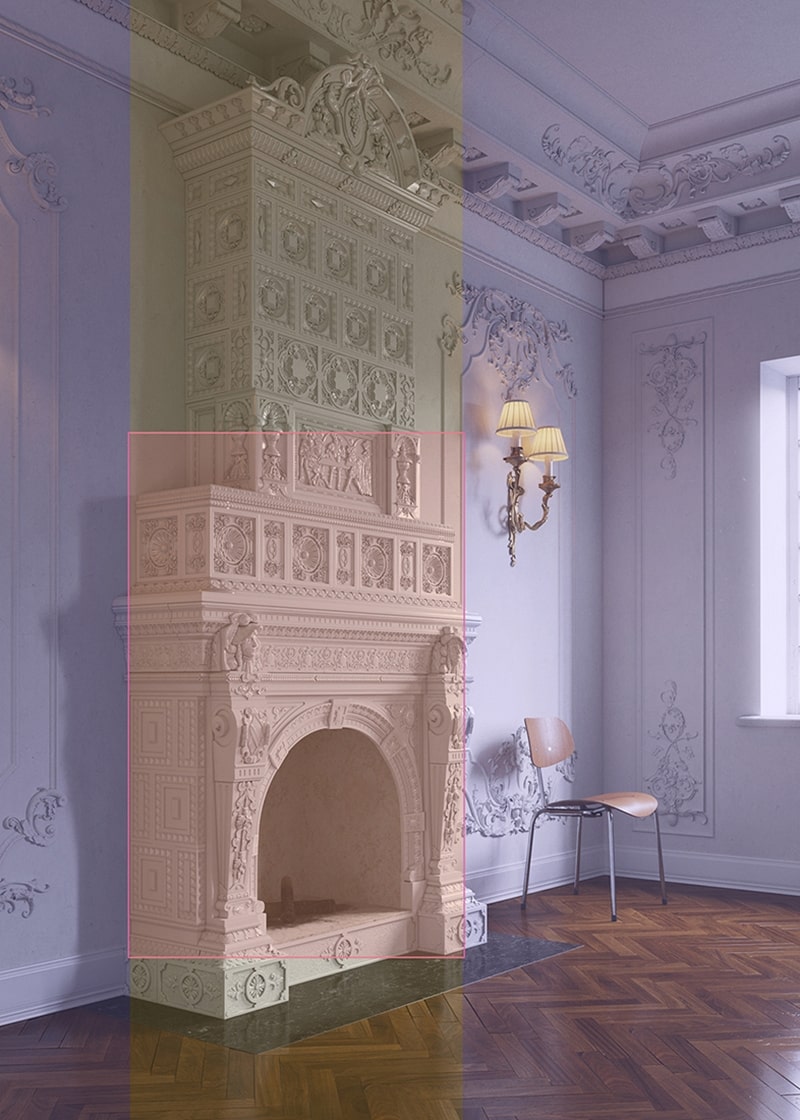 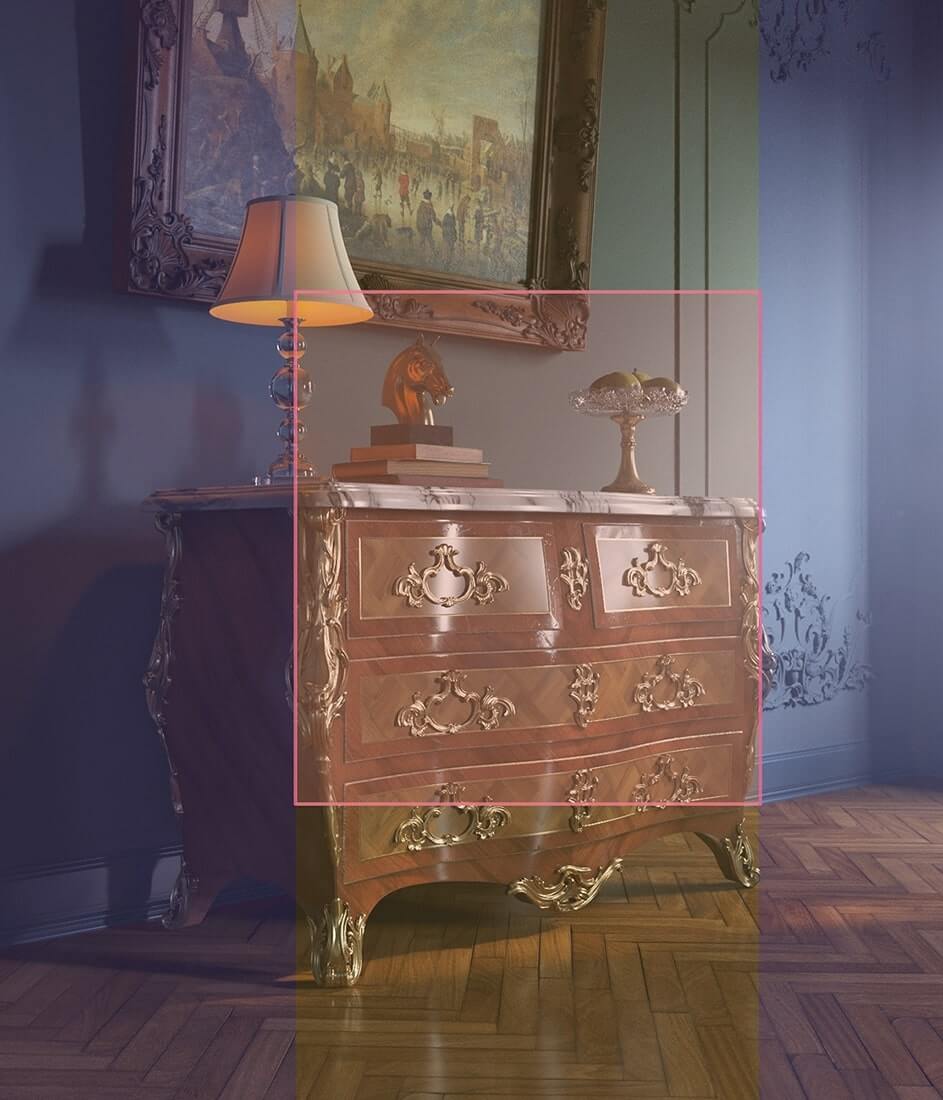 Now let's go directly to the renderings themselves

"Fireplace"
The vertical frame was dictated by the shape of the fireplace. This arrangement of the frame is best suited to correctly show its scale. Since the fireplace itself was white, as was the interior, the accents were a sconce and a chair. The chair, in this case, and as an interior item fit in and creates a museum feeling, as if a chair for the gallery curator.

Features of the frame: creating a floor
The creation of parquet in this work was not typical. I created a plane with a size proportional to the resolution of the parquet texture. Then attached the uvw map-plane modifier so that later the attached trims become with the desired mapping. Above created the dice. I made attach all the dice with the floor (attachment to the floor). I deleted the dice, only the trims remained. Then I applied the Shell modifier (5-10 mm) - Edit Poly (added chamfer). The advantage of this method is that you give the desired texture the geometry, which then can be edited as you like. And the texture itself can eventually grow old, add scratches in some places, and everything will perfectly fit the geometry. 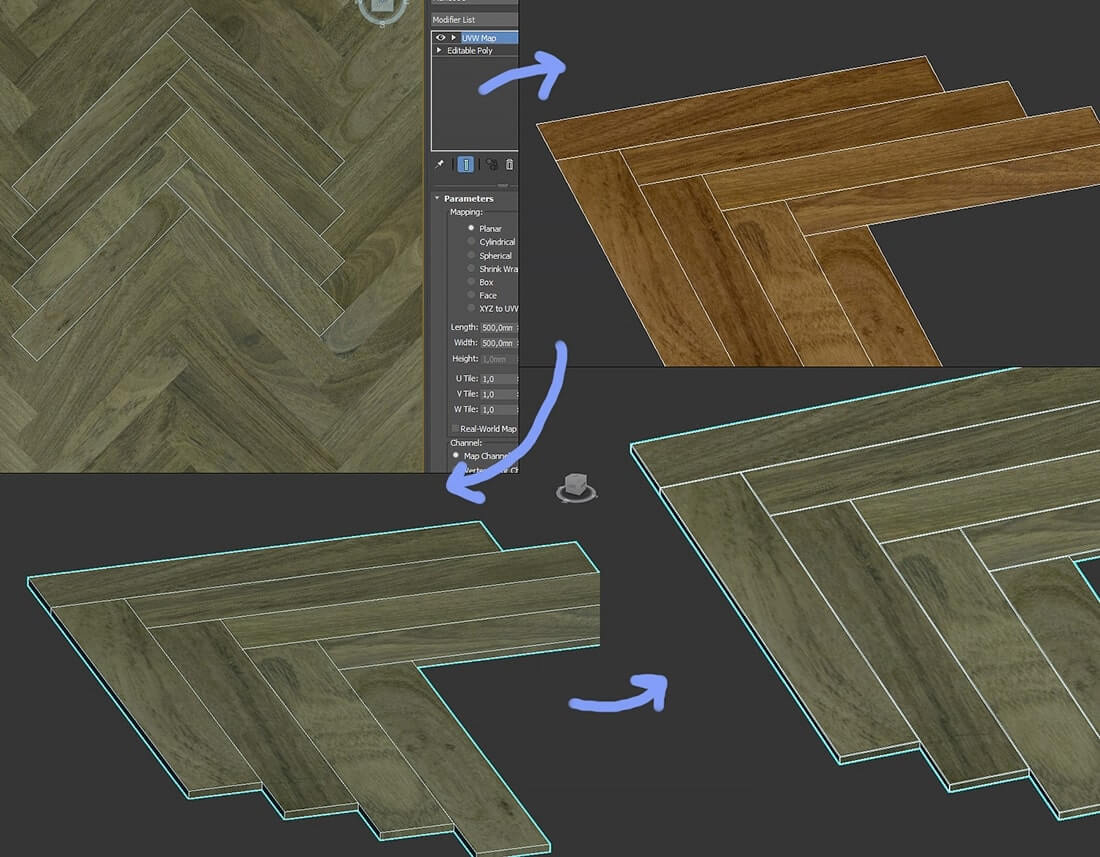 "Bed"
The desire to fit the whole bed in a frame, over and over again turned into a fiasco (I love that the whole object was visible in the frame). Many references were viewed and on one of them I found a very similar bed. The photo also had a table on a metal base. All I had to do was simulate a similar table and add accessories to it. The stucco molding and the floor migrated from the walls with a fireplace to maintain the feeling of a single space. Actually they will be on all frames. I decided to make the fabric in the foreground light in order to slightly dilute the remaining objects. The table has become an emphasis on this picture.

Features of the frame: large complex forms of stucco molding and beds duplicate each other. I forgot to remove the glass, so after a 10-hour render there was a lot of noise: D

"Chest of drawers"
The frame is very similar to a "fireplace." I did not pull it out for the remainder of the commode behind the scenes. And in order to make the color of the chest more saturated, the method of warmth was used. Against a dark and cold background, it is easier to make a beautiful, warm light from a table lamp. Even with such a detail of the chest of drawers, I had to work hard on the material of the tree. Make it a little aged and moderately glossy. Details on the dresser slightly balance the composition.

Features of the frame: I usually make aged materials according to the same scheme. Usually this is Blend material. The first slot is wood, the second is dirt. The tree is always with AO. Dirt textures, dents on the mask, are usually duplicated on the bump to emphasize the “dirt”. 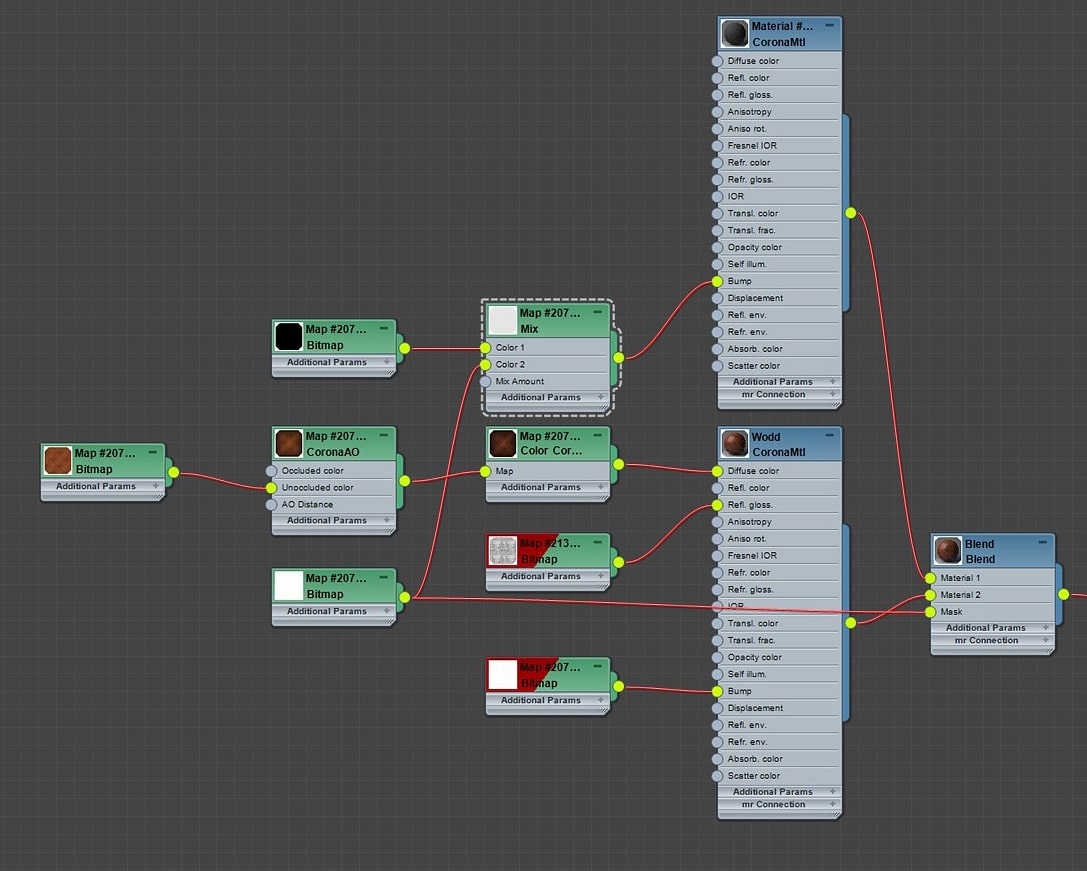 "Carafe with an armchair"
I wanted to do something atmospheric in the end. The effect of presence, as other frames were a little "dry" in this regard. They lacked life. But here, in my opinion, everything worked out. A complex table and chair, which so completely did not fit into any frame, became part of one good. By the way, the carved part of the chair didn’t really come out on the material, it was not possible to catch a beautiful color and reflection. Therefore, an excellent solution was to simply blur it: D. To give the effect of presence, you just need to stop the movement in the frame. On this render, this is cigar smoke and bubbles in a glass. Also added some flying particles and dust to give the atmosphere. All the rest of the work is done by the decanter.

Features of the frame: Post-processing was almost identical with other angles, but there are differences. On the screen you can see the stages of work. Perhaps they missed small movements of the curves, but slightly. So, the first thing the florist did was through mixing with the ready-made solution from color efex pro (crossprocessing). Went to green, 40% transparency. Added a little haze from the side of the window through the gradient, mixed by screen 40%.

The third stage. Through the texture of dust (any bw picture with a black background and small white dust particles) added particles. Then, with the help of the tool, the finger smeared the particles a little to give them movement. At the last stage, I added smoke, in the same way, through bw pictures and mixing on screen. But in the upper part the smoke should dissipate, so the mask slightly removed the saturation. Also a specular layer in some places added highlights. 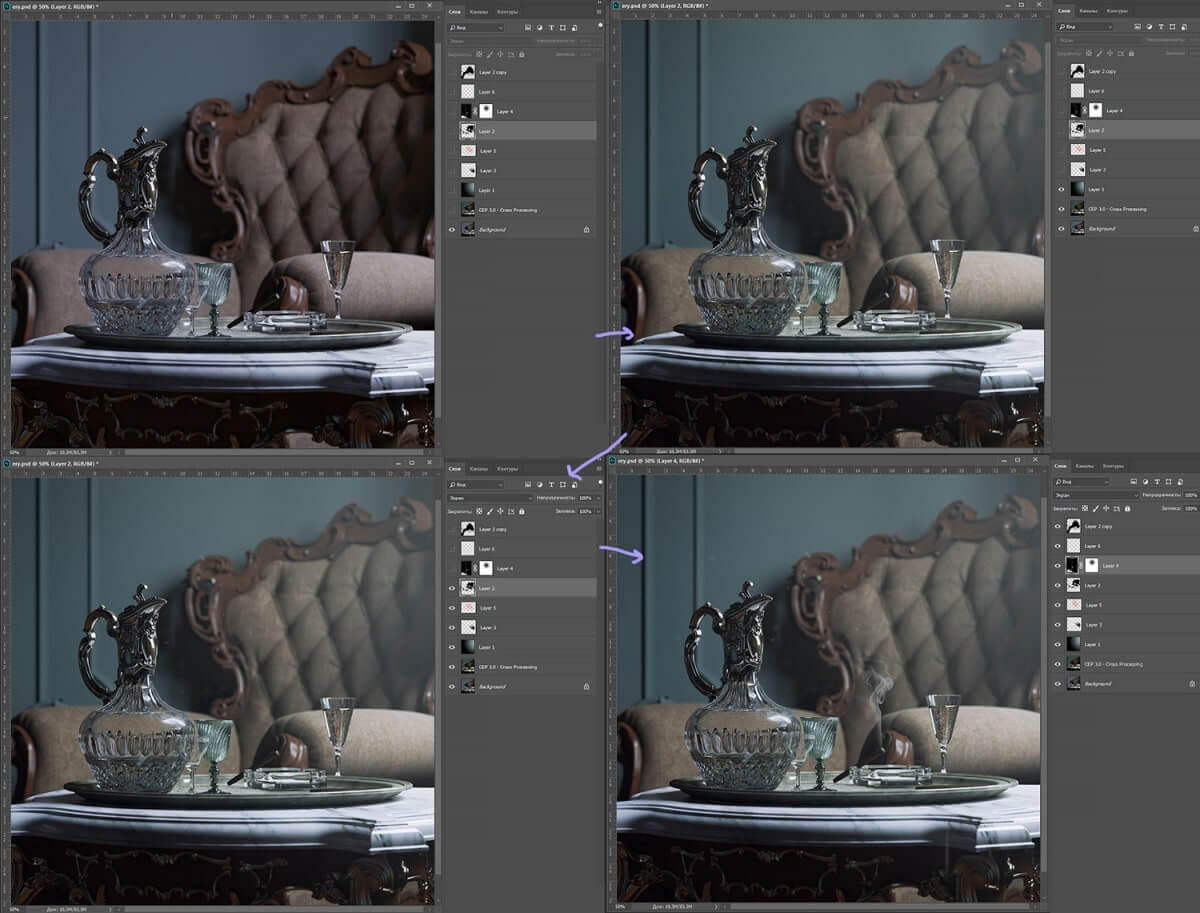 Close-ups
A decanter, a fruit bowl, a sconce, a fireplace, a frame, are an integral part of the work. Fill the voids of the general plans. They create a feeling of elaboration and provide an opportunity to "come closer" and consider the details. 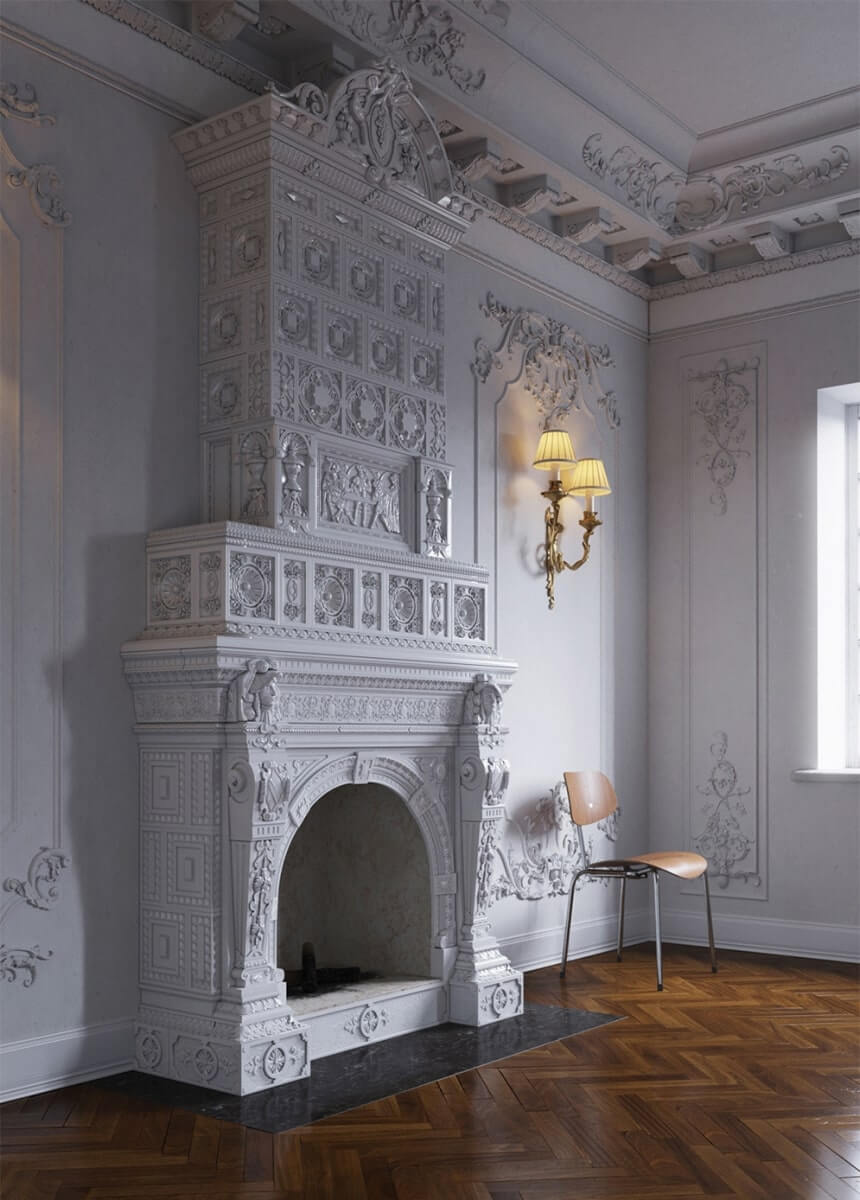 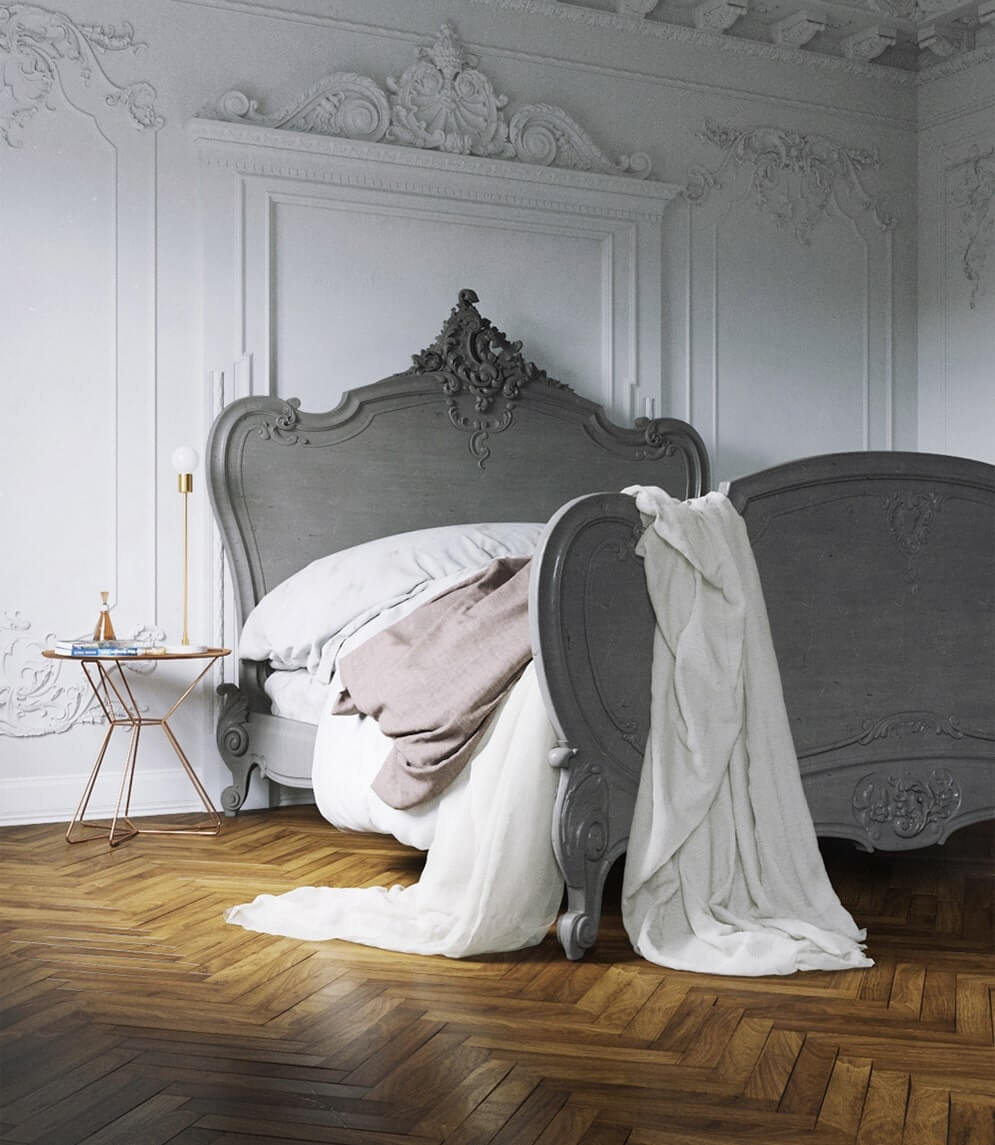 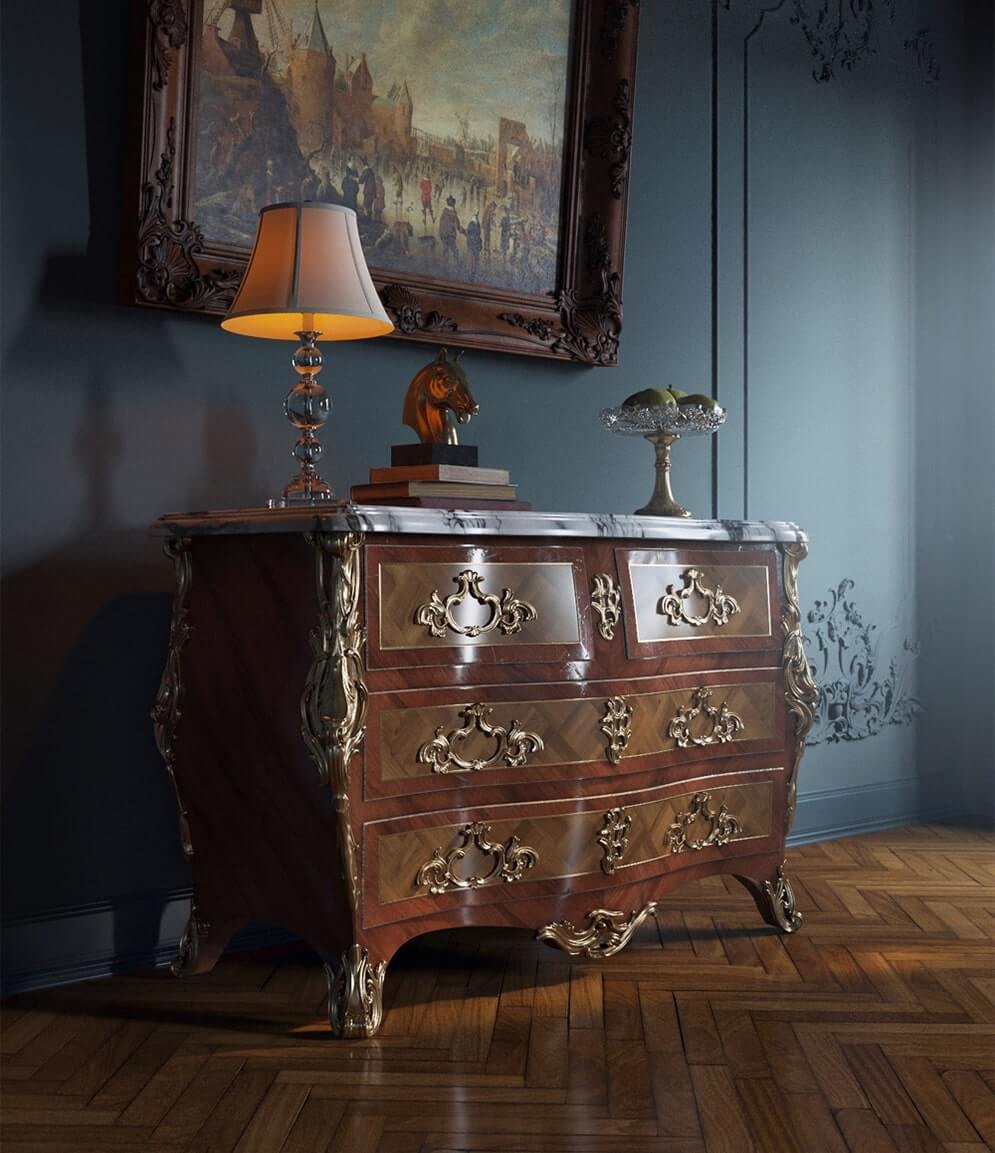 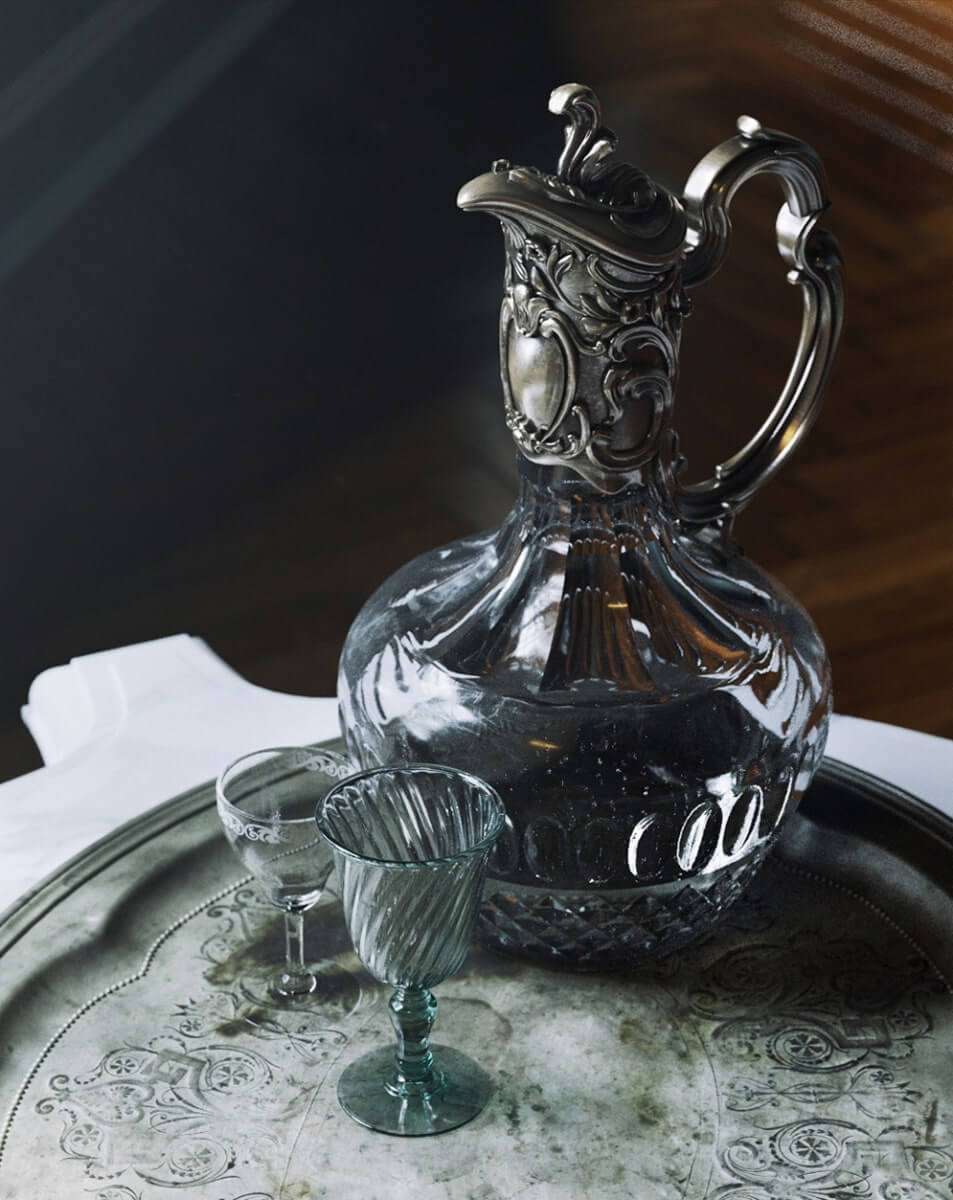 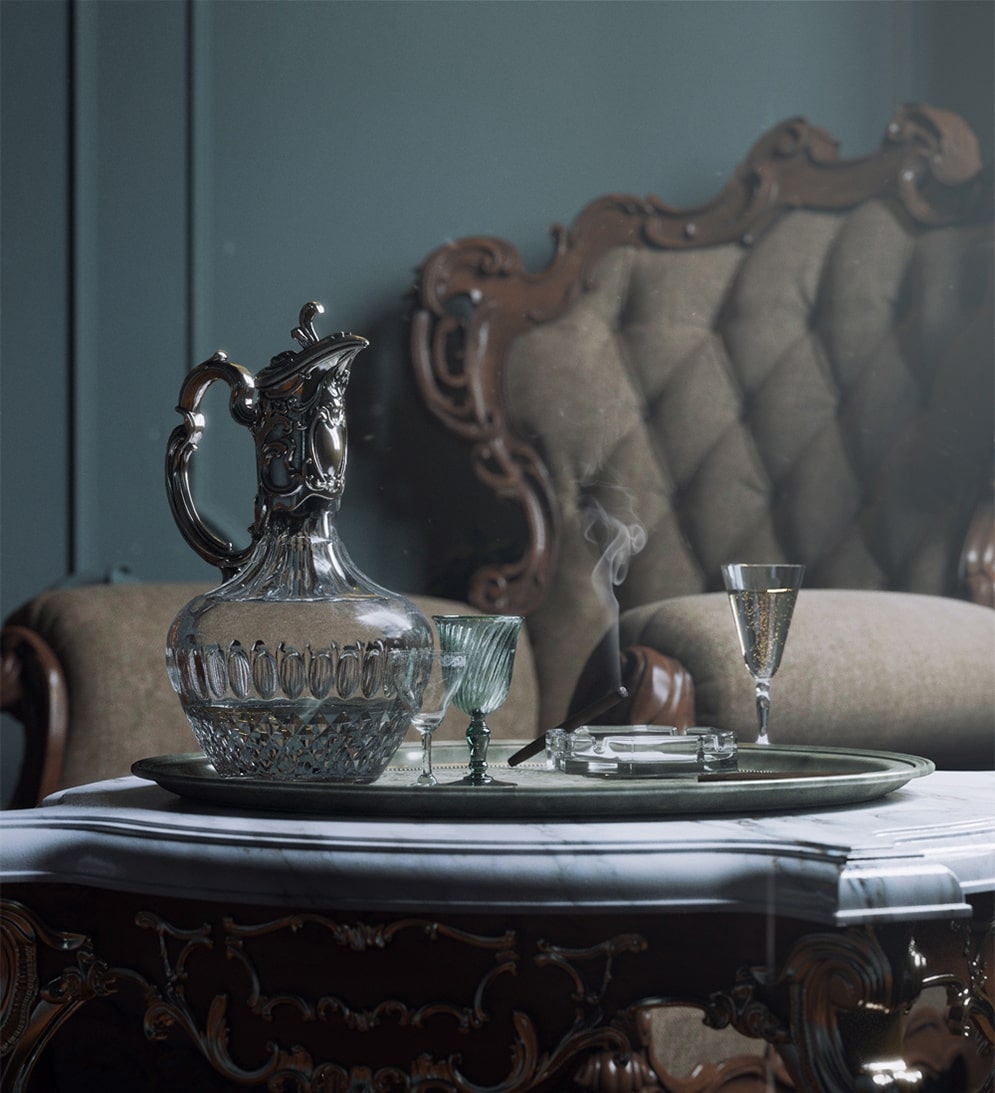 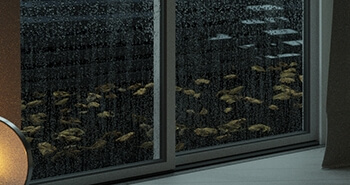 Today I’ll tell you about the method of creating drops after rain on the windows using Particle Flow. 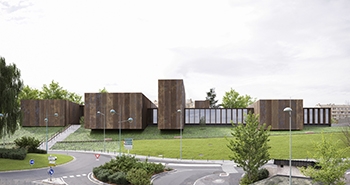 Hello everybody. My name is Sakul Vartanyan. I am 3D Artist from Yekaterinburg city (Russia). In this tutorial, I will share the important steps in creating my latest work, Soulages Museum. 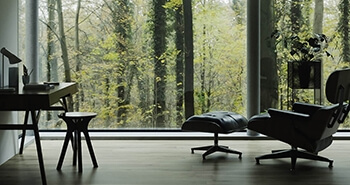