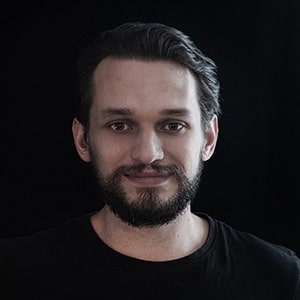 Bartosz is the Award-Winning CG artist from Poland who originally graduated from the faculty of architecture and urban planning. He had been the prolific creator since his very early years and thus made the decision of combining his artistic passions with received education in the field of architectural visualization. It soon became his main platform of professional activity and he has been successfully running his own arch-viz studio since 2014. Apart from it, he regularly strays out of his comfort zone to test himself along the entire creative spectrum of 3d graphics as well as design in general.

Bartosz strongly believes in creating artworks which not only answer a client's pragmatic needs but also reflect the individuality of the author. He devotes a large portion of his time to develop personal works in which he searches for his very own means of expression.

Throughout the years of his professional career, Bartosz had the opportunity to work with the major worldwide brands and approach the community as the speaker at various industry events such as SOA Academy Days and Total Chaos.

If you want to see more Bartosz works, just click on https://bartosz-domiczek.com or on Behance.